Why travelling solo is only lonely if you think it is. How Berlin has owned the scars of war in art and architecture. Enjoying Berliner nachtleben on a so-called alternative bar crawl. Remembering the divisions of the 20th century and what they cost.

The week in abstract form. Notes on the week is a regular blog by journalist Eleanor Langford that curates the best stories, culture, thoughts and interesting bits she’s picked up in the last seven days.

When I was in sixth form, my college organised a trip to Berlin for the students to complement our study of World War Two and Cold War. Places were limited and I left it too late to sign up. In the end, I was the last person on the waiting list when the trip left. So, over six years later and with nothing to do, I decided to make up for that missed opportunity and head to Berlin myself. Two weeks before my departure date, I bit the bullet and bought some budget flights. There was no going back now without losing my money, so off I went.

“But who are you going with? Won’t you be lonely? You’re so brave!” Such were the reactions to my decision to head to south-east Asia on a three-week solo trip last year. Embarking on that 6000-mile journey was nerve-wracking, but I don’t remember needing bravery or fearing loneliness. If I didn’t need it then, I certainly didn’t need it for a few days in Berlin.

Of course, how you travel should be down to your preference. There is no right or wrong way. But, there’s a lot to be said for setting off on your own. Many people misunderstand the realities and dismiss a wonderful experience unnecessarily.

I guess people often conflate loneliness and being alone. Strange, because the world is full of people (some would even argue too many). Talk to people and you might make a friend. That friend might agree to do things with you. Suddenly, as if by magic, you’re no longer on your own. The difference is that loneliness is a perception, whereas being alone is a temporary situation easily remedied.

But, if you’re like me and you value solitude, you can have that too. Forget the silly idea that there’s something wrong with wanting to be by yourself. I love the tranquillity of a reading a book during a meal for one or wandering around a gallery lost in my thoughts. But I also adore time shared with old friends, and time spent making new ones. Balance is important.

The scars of war 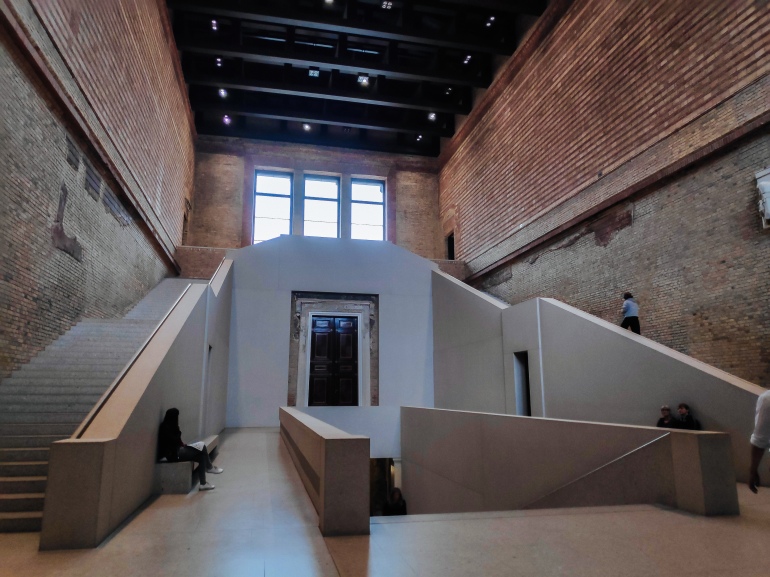 And so, I went to Berlin. In hindsight, at a 6:30 am flight was a bad idea. I left home at 3 am and arrived in Berlin at 9 am but couldn’t check into my hostel until 3 pm. That meant there was a rather dazed English girl wandering around the city.

Berlin surprised me; it was much quieter than I expected. I was used to the organised chaos of London, New York, and Paris, so the city’s steady pace was a shock. Watching the streets from the tram, I felt like I was in a small provincial town, not the capital of the world’s fourth-largest economy.

My first morning was spent wandering around the serene Neues Museum – a perfect introduction to the stark history of this city. The 19th building was heavily bombed during the Second World War and was left practically in ruin. Rather than replace or totally restore it, though, a wonderful middle ground was reached.

Bare, bomb-scorched walls surround minimal architectural elements. Whatever was left of the building has been preserved, and whatever was missing has been modernised. Signs charting the process of the restoration – completed in 2009 – are as fascinating as the museum’s prehistoric contents.

This effect of honouring the past whilst appreciating the present was, in my view, genius. And, I’m not alone in this opinion – the building earned British architect David Chipperfield the EU Prize for Contemporary Architecture in 2011.

In so few days, I managed to see the Berliner Dom, Alte Nationalgalerie, Altes Museum, and Pergamonmuseum. Amusingly, the latter doesn’t live up to its name at present. It was built to house the ancient Pergamon Altar which, due to renovations, isn’t even there. Nonetheless, the museums are fantastic. Artefacts of ancient Roman life, fine 19th-century art, stunning neo-Renaissance architecture; Berlin has it all. But everywhere you go the ghosts of war follow.

Every other room holds artefacts and artworks scarred by bombs. Many of the items, including the dome of Berlin’s cathedral, were not restored until decades after the bombs stopped falling. Amidst the confusion of the Cold War, such things weren’t a priority. The Berliner Dom still had rubble on its floor from bombings in the late 1960s.

Despite going solo, it was always easy to find entertainment into the evening. The first night in my hostel – the stylish and friendly Circus Hostel – I befriended a group of Americans who took me to try some craft ales. The second night, two guys from Florida invited me to join them on an “alternative bar crawl”. I had nothing else to do, so I agreed.

Meeting our group and guide in a candlelit bar, I hit it off with two American girls and stuck by them for the night. First, we tried spicy Mexikaner shots at a circus-themed underground bar, where a psych-indie band were playing a set. We then wound through the city, hitting up an absinthe bar and a pub with hundreds of beers on tap.

Our final stop was a nightclub nestled in a railway arch. The vibe wasn’t great, so we hopped in an Uber and headed for Tresor, a techno club in an old powerplant. It was a maze of concrete passages and industrial halls filled with pulsing lights. We stayed out late, and I’d say I got a pretty good impression of Berlin’s famous nightlife.
Remembering division

Weather-wise, my last two days in Germany were polar opposites of each other. The penultimate was pleasant and sunny, while the final was blustery and wet. Determined to make the most of the actual good weather, I chose to spend the former on outdoor sights.

Checkpoint Charlie was my first stop. But first I sat in the Starbucks opposite it to contemplate my day. It was strangely amusing sipping a Frappuccino a few hundred yards from the line that once divided capitalism and communism. What would Gorbachev think?

Finishing my coffee, I headed on into what was once Soviet East Berlin. My destination was the Memorial to the Murdered Jews of Europe. I’d seen photos of the site before, but the memorial surpassed my expectations.

There’s something pitiless about the rows of concrete slabs. It is not that they rise, but that the ground falls. The grey masses consume you. Uneven in height and subtly misaligned, they create a sense of unease.

The blocks seem human, but also inhumane. Concrete surrounds you until all you can see is the sky above and the criss-cross of avenues around. People flit in and out of sight; distant voices seem disembodied; despite clear paths ahead, the way out feels unclear. For me, it truly echoed the inhumanity of the holocaust. 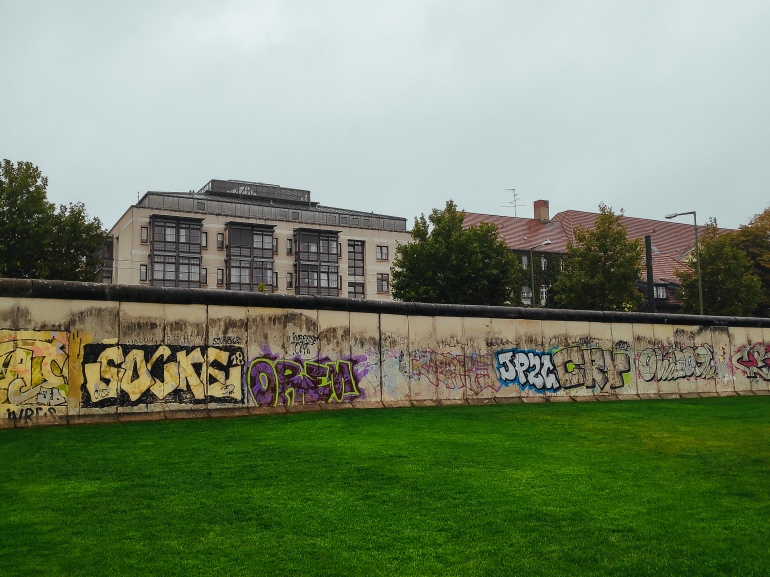 Under the rows of stelae is an exhibition, charting the history of this atrocity. In just a few years, the Third Reich went from smashing the windows of Jewish shops to opening their first purpose-built concentration camp. A stark reminder of how quickly evil can escalate.

In the north of the city, there is a small segment of the Cold War Berlin Wall still standing. Between the graffiti-covered sections stand iron poles indicating where the wall once stood but allowing space to pass through. There and at the Holocaust Memorial, these installations act as a reminder and a warning. Lest we forget that these regimes once stood, and how lucky we are that they have fallen.